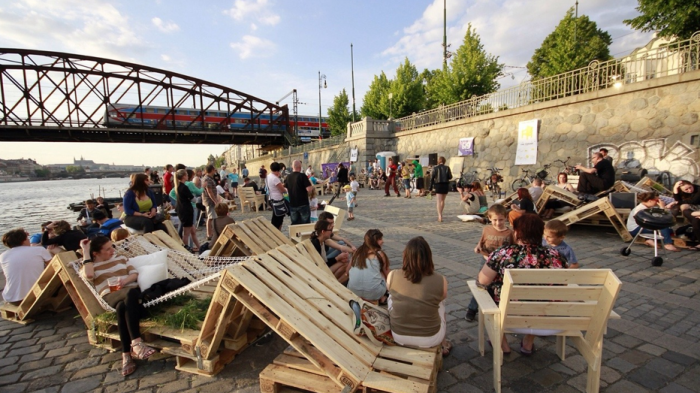 We were discussing and consulting in various places in Prague that we identified as producing an abundance of plastic waste, but with a great potential of improvements.

We were attempting an implementation of a reusable plastic cup system across Naplavka in Prague mainly in the years 2015 and 2016, trying to persuade TCP (Trade Centre Praha), which has been managing Prague Naplavka riversides. We prepared a plan of implementation, including all needed calculations, recommending NickNack reusable plastic cup system and cooperating with Greendoors (employing disabled people for the cups cleaning closeby). After few years, some changes have started to take place at the Prague Naplavka in these matters and hopefully we were adding to those changes by our proposals too.

Also, throughout the years (mainly between the years 2017 and 2020), we tried to propose to food corners in various shopping centres in Prague to use other than single plastic use cups, cutlery and plates. Unfortunately, they were not usually open to such a change yet or they were not able to make the change themselves, being dependent on the shopping centre operations management.

Additionally at the same time, we have talked with employees of Ugo and similar brands that have been using single used plastic cups for their juice drinks, to try to discuss with them alternative options to single use plastic material. We also found out that such a cup has even for those chains some money value so it could be interesting for them also financially to try to replace them by reusable options. And provide a little discount to customers who bring their own cup/ container for the juice.

facebook.com/respon.cz
+420 723 136 975
responcz@gmail.com
We use cookies on our website to give you the most relevant experience by remembering your preferences and repeat visits. By clicking “Accept All”, you consent to the use of ALL the cookies. However, you may visit "Cookie Settings" to provide a controlled consent.
Cookie SettingsAccept All
Manage consent

This website uses cookies to improve your experience while you navigate through the website. Out of these, the cookies that are categorized as necessary are stored on your browser as they are essential for the working of basic functionalities of the website. We also use third-party cookies that help us analyze and understand how you use this website. These cookies will be stored in your browser only with your consent. You also have the option to opt-out of these cookies. But opting out of some of these cookies may affect your browsing experience.
Necessary Always Enabled
Necessary cookies are absolutely essential for the website to function properly. These cookies ensure basic functionalities and security features of the website, anonymously.
Functional
Functional cookies help to perform certain functionalities like sharing the content of the website on social media platforms, collect feedbacks, and other third-party features.
Performance
Performance cookies are used to understand and analyze the key performance indexes of the website which helps in delivering a better user experience for the visitors.
Analytics
Analytical cookies are used to understand how visitors interact with the website. These cookies help provide information on metrics the number of visitors, bounce rate, traffic source, etc.
Advertisement
Advertisement cookies are used to provide visitors with relevant ads and marketing campaigns. These cookies track visitors across websites and collect information to provide customized ads.
Others
Other uncategorized cookies are those that are being analyzed and have not been classified into a category as yet.
SAVE & ACCEPT